We like pita bread with hummus, but we don’t like pita people, which stands for Pain In The You Know What.

I’ve been thinking about nice vs. pita authors, having been complimented lately for being one of the nice ones. It’s easy to figure out that nice works so much better than pita, especially if you’ve had to deal with pita authors in professional situations. And as a bookseller for ten years, and as an author for many more, I’ve had experience.

The first pita author encounter I really remember was when I was managing a bookstore in suburban Detroit. The author called up to request that my store sell her book after a talk she was scheduled to give in a few weeks at some nearby venue. I didn’t know her name, but she was local and she had written a book, and it had gotten published, and she was promoting it as best she could. She’d gotten a speaking gig with a service group, as I remember, and she had been told that as many as 200 people would attend.

I congratulated her on her book, but said we couldn’t sell her book off-site. “We’re not really set up to do that, I’m afraid.”

She was shocked. She had called to offer us this opportunity to make money. “Why not? You’d sell 200 books!”

“Well,” I said, “to begin with, the expense wouldn’t really justify—”

“Wait a minute. It’d be like two employees at minimum wage.”

“We pay our employees above minimum wage. But there are liability issues with having employees off-site, using private vehicles, but I’m really getting ahead of things, because—”

She kept interrupting, never giving me a chance to say: Look, lady. First of all, you’re not going to sell a book to every person who comes to your event, because you’re not Stephen King or Madonna or Mickey Mantle. We would have to guess how many books of yours to order, pay the publisher or distributor for them, pay for shipping, and of course receive and account for the order. We would need to prepare a cash drawer for cash customers. We would need to acquire a credit card terminal or disconnect one of ours currently in use in the store, take it to the venue in advance, and install a dedicated phone line to handle credit card data processing. We would need to arrange for a table or counter upon which to display the book and do business, and a chair or two for our staff. On the day of the event, hours ahead of the start of your talk, we would need to pull one or two employees from their scheduled work at the store to load the books and supplies into whatever vehicle we’d figured out to use, give them instructions, and hope for the best. At the venue, the staff would have to unload the books, cash drawer, and credit card machine, make sure the electronics are running right, and call for help if they’re not. After your talk, the staff would sell books. After that, the staff would pack up unsold books and everything else, return to the store, and unload everything. We would have to box up, arrange for, and pay for shipping to return unsold stock to the publisher or distributor. Our gross profit margin on a hardcover book is about fifty-five percent. After normal expenses—staff, rent, supplies—we’re talking about ten percent profit, or a dollar sixty-two cents, if your book is selling for eighteen dollars and we give our standard ten percent discount on hardcovers. So if we sold a hundred books for you, our profit would be a hundred sixty-two dollars. If, as would be much more likely, we sold twenty-five books for you, our profit would be forty dollars and fifty cents. We might mention the cost of installing the phone line at the venue, the wages of the extra staff to cover the work of the regular staff sent to your event, and if we took a look at all that, as well as mileage, vehicle expense, and a special insurance rider, lady, we would be paying for the privilege of selling your book at your event. Have a nice day. 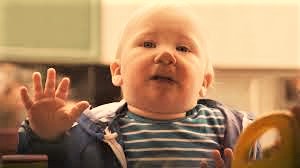 [Mamas, don’t let your babies grow up to be pitas. Screen grab from a Microsoft computer TV ad, since I couldn’t use a photo of one of the people I’m talking about in this post. I'm writing this on a Microsoft device, so yay, Microsoft; be cool with my using this image, OK?]
[The things we have to think about.]

In general, famous people are pretty cool, don’t act like pitas, and say thank you nicely. In general. A super famous artist with a new book out about her work wanted to do an event at another store I was managing, this one in suburban Chicago. Great, we’d love to have her. Our publicist got her on the phone to set things up and see what we could do—host a reading and signing, or maybe she’d like to give a lecture, whatever she’d like? The event did get set up, although the artist found it necessary to comment on the publicist’s ethnicity and guess at her religion as they chatted. In not a friendly way.

The day before the event, the artist phoned the publicist and asked her to buy theater tickets for her, because a very socially important Hollywood movie had just come out, and she needed to see it, and tickets in this first week of the release were hard to get. Incredibly to me, the publicist was willing to go over to the theater and buy the tickets the artist wanted. But she objected that if the artist went to the movie, she would be terribly late for her event, which had already been in all the papers, posters in the store, etc. The artist didn’t care. The publicist went out and bought the tickets, the artist went to the movie, fans of hers showed up on a bitter winter night at the store and waited for an hour and a half to see her swoop in, stomp the snow off her boots, say a few words (most of which concerned the socially important Hollywood picture she had just seen and thought wonderful), sign a few books, and leave. Have a nice day.

Then there was the hot young author whose debut literary novel was rocketing around all the lists and magazines. He did an event at a bookstore in California managed by a subordinate of mine. This was one of the big chains, and I was the regional director. The store manager and her staff put on a beautiful event for this author and his book, drawing in a crowd of about fifty people, which is saying something for a debut literary work. There was a little reception with snacks and coffee. They had a microphone and lectern for the author. He gave an entertaining talk, signed dozens of books, and chatted with customers. Perfect! As he was leaving, the store manager went over and thanked him for coming and said she’d enjoyed the evening very much herself. She extended her hand. He took it, looked her in the eye, and said in a tone that was, as she recalled, a perfect blend of nastiness and sarcasm, “Kill the independents.” Have a nice day.

I could go on. Well, you know, it feels good to dish about this stuff once in a while. I hope you found this pita post educational! As a friend of mine once said, “It’s not gossip; it’s cleansing.”

Have you dealt with a pita author? To post, click below where it says, 'No Comments,' or '2 Comments,' or whatever.
If you'd like to receive this blog automatically as an email, look to the right, above my bio, and subscribe there. Thanks for looking in.
Posted by Elizabeth Sims at 12:54 PM

Email ThisBlogThis!Share to TwitterShare to FacebookShare to Pinterest
Labels: bookstores, Dishing on Pita Authors, Microsoft, pita, tremendously unreasonable people who will someday be lonely and sad