Welcome to the third installment of Close Reading, where I analyze examples of published writing and discuss how and why they work or don’t.

I’m a come-lately reader to Jim Harrison, author of the novella Legends of the Fall (made into a big movie with Brad Pitt in 1994), the highly praised novels Sundog and Dalva, and numerous other fiction and collections of poetry. He also wrote journalism and occasional pieces for various magazines. Jim died this year, and I’ve been thinking about him, having met him a few times, twenty-plus years ago. (I ran a bookstore where he did a couple of signings, and a friend of mine became his assistant in Montana.) I never read his work because I didn’t like him personally, which was probably unfair, and because he wrote stuff about how horrible Hollywood was AFTER he’d made his two million dollars there, but whatever. Not long ago I came across a collection of his nonfiction called Just Before Dark in a used-bookstore and decided to give him a try.

I have an acute sense of when an author’s being pretentious, and I saw a few instances of that in this collection, such as here, from an article about fly fishing (“Guiding Light in the Keys”), originally published in Sports Illustrated. The passage describes a professional fishing guide:

[excerpt begins]
At home in the evenings, Sexton exercises his casting arm—which looks like an oak club—by going through all the motions with a twelve-pound sledgehammer with a foreshortened handle.
[excerpt ends]

While the arm looking like an oak club is great, the pretentious part is ‘foreshortened.’ The hammer’s handle was shortened. Foreshortened is an art term, and perhaps because of that it sounds more intellectual than simply shortened. So I mark Harrison—and whoever his editor at Sports Illustrated was—down for that. Do not do shit like that in your writing.

However, one should not throw a one-eyed, two-hundred-fifty-pound baby out with the bathwater, so here is a passage from another piece. This one, I think, is wonderful. It’s a complete paragraph from an article called “Don’t Fence Me In,” originally published by Conde Nast Traveler. The article is about taking automobile trips for the hell of it.

[excerpt begins]
This sort of driving can be a fabulous restorative. Unlike in an airplane, you can stop, turn right or left, on a whim. Driving into emptiness keeps you at least a few miles ahead of your neuroses, and by the time they catch up to you when you bed down in the evening, you are too tired to pay any attention to them. This past year I had a great deal of leisure time, so I drove 42,000 miles around the United States, avoiding the interstates whenever possible. Driving offers peace solitude, inaccessibility, and the freedom and adventure that allow me to think up new novels and rest from the last one. Your whimsicality returns; you’ve already driven to Arizona—why not continue on down to San Carlos, Mexico and hike out the Seri Indian territory on the coast of the Sea of Cortes? And there, camped out on a mountain ridge under a glorious full moon, you throw the wrong kind of porous log on the fire and then dance a new tune as a dozen angry scorpions shoot out, a fresh brand of reality pudding. The trip was a mere seven thousand miles but without a single moment of boredom, the brain once again rippling like a smooth underground river.
[excerpt ends]

The first cool thing about this paragraph is the “few miles ahead of your neuroses,” which is frank and blunt, and because of that, bleakly funny. A dull mind would not think of putting it that way, so as a reader, you can relax and know you’re likely to get some more good stuff. 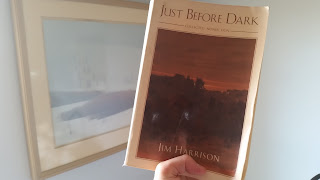 [Cover of Just Before Dark; artwork by Russell Chatham, who was a friend of Harrison’s. A Chatham lithograph hangs in the background on my office wall. (Another story.)]

Apart from the mildly interesting fact that Harrison can think better while moving along in a car, we also get the exotic mention of Mexico and an impromptu hike. Then the passionate bit about the mountain ridge and the moon, and you think that’s nice but is he about to turn purple on me?, but no, he gives you the mistake, the log, the scorpions, the dance, and you can laugh because he certainly expects you to. And again, the moment is funnier because it comes after this serious stuff about the awesome beauty of the world. Juxtaposition can be your friend.

Technical note on first and second person here. You’ll notice that the writer skips around from second person “…you can stop, turn…” to first “I had a great deal of leisure time…” and back to second again “Your whimsicality returns…” and it works. Why? Because this is an informal piece, not a term paper, and shifting from first to second person is conversational. Most people do it all the time while talking, not really aware of making any grammatical shifts at all. And it sounds fine; it sounds real. I encourage you to experiment with this in your own writing.

The closing image of the “brain once again rippling like a smooth underground river” is just topping, isn’t it? Power, ease, movement—all of that is suggested. And because of the “once again,” we understand that something lost has been regained. The attentive reader goes home happy.

Final note: This is just one paragraph in the middle of a long essay of thousands of words. Yet the graph has a structure of its own. Study it over again: There’s a beginning that serves as an introduction, a little story in the middle, and a very satisfying ending. Not every graph Harrison wrote was structured this way, and that’s OK, of course; not every graph he ever wrote is that perfect, and that’s OK too.


If you'd like to receive this blog automatically as an email, look to the right, above my bio, and subscribe there. Thanks for looking in.
Posted by Elizabeth Sims at 11:11 PM