1)
After a two-year hiatus, I’ll be back at the Florida Writer’s Association annual conference (October 20-23, 2016 in Altamonte Springs). Gonna teach “Fearless Writing” and “How to Write Dialogue Like a Pro,” and will be available for individual consults as well. They’re still putting together the lineup, but here’s the link. Will talk writing for martinis come bar time. Tank regular, dry, up, olives. Think of it as an investment.

2)
My Marcia has designed, built, and launched an extraordinary math game for kids and adults. Number Round-Up uses the world’s smartest tiny horses to help players master sorting, set theory, commonalities, and more. Get links to the free demo and paid versions at Logical Game Studio. This really is a cool game, currently in the Chrome store. No ads, no upselling, just a well built, charming, thoroughly kid-and-adult-tested game that helps foster a love of math and logic. If you take a look, I’d love to hear what you think of it!

Dearest writer, do you sometimes struggle to describe your characters in a way that works smoothly with your action and plot? Do you have too much self respect to make them stand in front of a mirror and remark upon their baggy eyes / shining auburn hair / six-pack physique, etc? Is it especially challenging to describe a character’s changes over time, whether months or decades?

Help is here. In the last few months I’ve suggested this to a few clients, and today thought I’d share it with everybody. Very simple: Let somebody come upon an old snapshot, whether on coated paper from a Pleistocene-era camera, a Kodachrome slide that has to be held up to the light, or something digital. 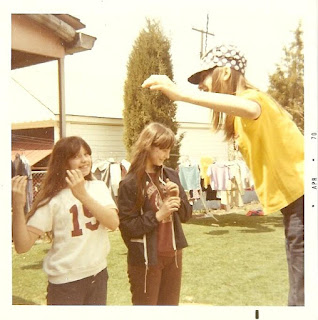 [Musical and bossy even back then: Leading the neighborhood band.
Photo thanks to old pal BB.]

You are with me on this instantly, right? The picture can be of the character himself or herself (just can’t do ‘themself,’ never will), or of a beloved, or the enemy, or whoEVER.

While clearing out Jesse’s room, she came upon a snapshot of him with his 1978 prom date. She didn’t remember the girl at all. But there was Jesse standing tall, his gaze level and composed, in spite of the crazy maroon velvet tuxedo he was wearing.

No return address. I tore open the envelope. A black-and-white snapshot with crinkle-cut edges fell out, and I immediately recognized my stepfather standing beneath the wing of his plane with his flight crew. Full head of wind-tossed hair, wolfen grin, and that cold look in his eyes I remembered so well, too well.

He surfed over to CNN and couldn’t believe it: There she was, smiling on the courthouse steps, looking pale but triumphant. Acquitted! Wearing her hair still in those stupid pigtails. Pink lipstick. Pink dress. Hell!

You get the idea. Rock on.

What do you think? To post, click below where it says, 'No Comments,' or '2 Comments,' or whatever.
If you'd like to receive this blog automatically as an email, look to the right, above my bio, and subscribe there. Thanks for looking in.
Posted by Elizabeth Sims at 1:16 PM