One of my favorite myths, since I could read, is the story of Baucis and Philemon, first written down by Ovid. (Baucis is properly pronounced Baw-kis, and with Philemon you place your emphasis on the first syllable.) They were an old, poor but hardworking couple who lived in a hut. I believe a thin cow lurked outside. Cows in these tales are always thin.

One day Mercury decided to have some fun on Earth. He took off slumming, disguised as a hiker, and around noontime approached the humble hut. He wondered if he might have some refreshment. Baucis and Philemon welcomed him in, and set the table with all the food they had: a loaf of bread, some cheese, some grapes, and a pitcher of milk (remember thin cow). Mercury ate some food, and they all shared the milk. When Mercury asked for more, Baucis sadly upended the pitcher to show it was empty—but what do you think? 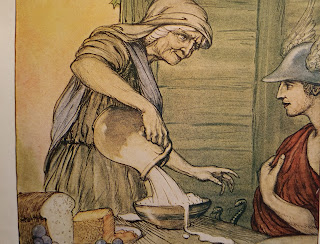 Milk spilled all over, and the pitcher never went dry again; it always brimmed with fresh, delicious milk. They would never starve. What’s more, Mercury asked the couple what their dearest wish was. They answered that they’d like never to be apart. Mercury went away quietly, and saw to it that their wish was granted. When they died, they became an oak and a linden tree, which grew intertwined forever. I’ve seen other versions of the story in which the magic pitcher contained wine instead of milk, which, hey, cool. (Picture of Baucis and Mercury from my Wonder Book by Nathaniel Hawthorne, 1935 edition. Illustration by Milo Winter. Note friendly snakes from the god's caduceus ready to lap up the spill.)

The moral, of course, is that one should be good to everyone, because one never knows who that stranger really is. This is part of many spiritual teachings: “Whatsoever you do to the least of my brothers, that you do unto me.” Do good for the sake of doing good, and reward will come in the form of good karma, or possibly eternal life, or maybe even a new Corvette. You never know.

How to translate this to a modern story? First let’s unpack it. We have: the poverty and kindliness of Baucis and Philemon; the powerful god who can confer reward as well as, we assume, punishment; the enduring love of the old couple; and finally, the god’s kind heart, which matches the mortals’. There’s a lot of material here, and storytellers have used it over and over. Plus wasn’t there some reality show about a kindly angel who grants wishes to good people?

To make the story fresh for today, how about creating a sort of anti-god who runs around doing stuff? Yeah, how bout a garbage collector who snags broken toys from the rich neighborhood, fixes them up, and gives them to the kids in the poor neighborhood? One day he’s got a cold, but he’s on the job, and it’s extra miserable because the boss is being a bastard. Some little poor kid sees the garbage guy’s runny nose and dashes inside to bring him some orange juice. He might secretly reward that little kid for years, just because.

The power differential is key here. What is true power? There’s material power: I can confer gifts to you. And there’s spiritual power: I can love you. Couldn’t we keep riffing on this for hours? Yeah. Take it away. I love you.


If you'd like to receive this blog automatically as an email, look to the right, above my bio, and subscribe there. Thanks for looking in.
Posted by Elizabeth Sims at 12:28 PM