When you work at home it’s important to get out of the house now and then. Yesterday Marcia and I went to the Salvador Dali museum in St. Petersburg to see the special M.C. Escher exhibit. As I posted on Facebook and Twitter (yeah, cripe, I actually sent out a couple of real-time tweets), Escher was one of my artistic heroes in college. Indeed, I’m sure his precise methods and mind-blowing illusions are still popular with lots of college kids. Anybody else remember that black-light poster version of ‘Three Spheres’?

The exhibit, on loan through Jan. 3 from the Herakleidon in Greece (yeah, I wonder too) shed more light on Escher for me. I hadn’t known or remembered that he’d been born (1898) into a rich Dutch family, who helped support him as he worked to develop his skills and market his work. He married, had kids, and kept working.

Yesterday I learned that it took him THIRTY YEARS to get his income high enough to support his family adequately. During this time he was frequently depressed due to his lack of financial success. One might expect that he shouldn’t have gotten downhearted, because hey, his parents were behind him, and his kids were assured of food, school shoes, and summer camp.

But I can relate. Anyone who has tried to earn an independent living from art can relate. (Anybody else thinking of Van Gogh right now?) You want to succeed, and income is a sign that your art is making the full circle it’s supposed to make: from you to the consumer, then back to you to make more. Serious artists the world over feel this urgency.

So don’t ever feel greedy or shabby if you yearn for your art to pay off. It means you care. 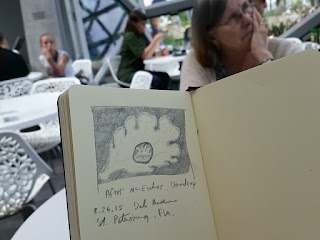 [I always attempt to copy something whenever I go to a museum. My efforts pale in comparison, but I learn something every time. Here I tried to represent the subtle difference of light: It’s falling on the upper edges of the leaf, making them slightly brighter, and leaving the lower edges darker.]
Another thing. Escher loved Italy; he met his wife there, had a child, and found great inspiration in the country’s landscapes. But things got bad under Mussolini. In 1935 Escher moved his family to Switzerland, where his kids wouldn’t be forced to march around in quasi-military uniforms carrying dummy guns. The wintry Swiss landscape felt desolate to him, and his art withered. Until, that is, he decided he’d better stop mourning Italy and look within for inspiration. This triggered his work with plane division, tessellation, and dimensional illusion. And that is what made him a rock star in his own lifetime.


If you'd like to receive this blog automatically as an email, look to the right, above my bio, and subscribe there. Thanks for looking in.
Posted by Elizabeth Sims at 1:13 PM