I’m currently working on a new article for Writer’s Digest, this one on using just two tools to fix any problem in a fiction manuscript. Curious? So am I…

But so hey, one of my correspondents had a few questions via email, and after answering, I thought yall might like to hear it too. (Thank you, C./M.)

The questions concerned a manuscript nearing completion, and what should be done about getting it into the world.

Here’s what I say:

Regarding Spruce Park Press, I’m not publishing anybody except myself at the moment; not sure if I ever will; gotta see how that goes. It’s a wild kingdom out there in our business right now. I was thinking I’d stay self-published from now on, but am considering writing a novel expressly for my agent to shop around, and give the Big 5 another go. 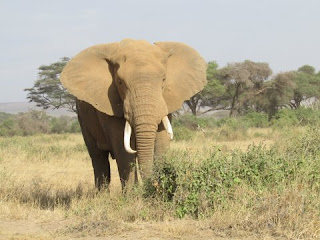 [My friend Jan Kimmel took this photo in Kenya. Wild, you know, kingdom.]
The so-called Big 5 are the largest 5 publishers in New York, at the moment Penguin Random House (yes, all one name; they merged a while back), Macmillan, HarperCollins, Hachette, and Simon & Schuster. My Rita Farmer series was initially published by Macmillan.

Most newbies want to try to break into the Big 5; if that’s you, you should start submitting to agents when your ms is as ready as it can be. Have you had a professional edit yet? I strongly recommend one, whether you try for representation or self-publish. There are lots of good editors out there; I’m one of them. I’ve just freshened up my  service page  with some client raves.

Regarding Big 5 vs. small press. You’d get the same royalty rates from either, pretty much. Big 5 will give you more exposure in stores, but you’re a minnow in a big pond, unless you get a mega deal right away. Smaller presses can do a very good job in other ways, and some writers are happy with their smaller press. I do, however, remember being at the Lambda awards the night I won, sitting next to my (small-press) publisher, who, in answer to my question about, like, any plans to expand?, leaned back in his chair, laced his fingers behind his head, and said, “I like being small.” My next title was in production, and I was under contract for the next, but was outta there after that.

The option to self-pub will always be there. If you shake the bushes and nothing falls out, you can always DIY.

I’ll be attending the Golden Crown Literary Society conference in New Orleans in a couple of weeks. Left Field is a finalist for a ‘Goldie’ award, therefore I will suffer through the awards ceremony, prepared for both best and worst. It’s all worst, actually.

Have never done three panels in one conference before:

Then I’ll join “Liar, Liar”, moderated by Carsen Taite, with Dorothy Allison, Georgia Beers, Melissa Brayden, and Andi Marquette. We’re all to come prepared with a few true outrageous stories about ourselves, as well as one false one. Audience gets to guess. I hope there will be huge prizes for the winners. This one will be open to the public. (Dorothy is doing the keynote address this year, as well. Stay away if four-letter words combined with the names of deities bother you…)

For the second year in a row I’ve gotten roped into presenting at the Florida Heritage Book Festival and Writers Conference in September. I’ll lead a special critique session on Thursday, then will deliver a presentation on Friday, “Fearless Writing.” The web site has info on signing up for everything, including critique day. It’s a very nicely run conference in beautiful St. Augustine. If you join my critique group you’ll get an individual written consult from me on your first 10 pages, and the opportunity to learn and ask questions all day long.

And no, I can't make it to the Florida Writers Association conference this year, but hope to be there next year.


If you'd like to receive this blog automatically as an email, look to the right, above my bio, and subscribe there. Thanks for looking in.
Posted by Elizabeth Sims at 12:05 PM