Forgiveness has long been an absorbing interest of mine. I wonder if that’s so for most people who grew up under the Judeo-Christian ideology. My family was as Roman Catholic as my mom could engineer. All of us kids were sent to catechism lessons, the weeknight equivalent of Protestant kids’ Sunday school. As far as I was concerned, the only reason to go to catechism was Sister Jeffrey Ann, whose job was to prepare us public-school seven-year-olds for our First Communion. She was kind and beautiful, standing approximately eight feet tall in her full habit and wimple.

One snowy Michigan night, she deconstructed the Our Father for us. We—all the little Poles, Italians, and Irish in town—lots of Irish, as Mr. and Mrs. Flynn obeyed the proscription against birth control scrupulously—had been reciting the prayer for years, but had we stopped to ponder what it really meant? We hadn't.

Sister Jeffrey Ann went over the prayer line by line, word by word. When she came to “as we forgive those who trespass against us,” it hit me like an ice bucket challenge. According to the sister, holy crap, we, us'ns, who were years from even learning what Kotex were, we, personally, were supposed to forgive.

Up until then, I had the impression that just by saying the prayer you were making a deposit on the good side of your ledger; it had nothing to do with real life. Whenever some other kid did me wrong, all I cared about was revenge.

Sister Jeffrey Ann’s lesson can be ultimately simplified to THIS MEANS YOU. Immediate. Timeless.

Little slights, of course, are easy to forgive. Aren’t they?

What fascinates me are people who forgive the unforgivable. 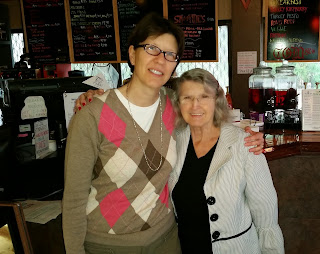 [It was my honor to meet and hang with Agnes Furey earlier this year. Photo by Unknown Barista.]

In Zestful Blog post #67 (Aug. 21, 2014), I wrote about how to develop one's voice as a writer. I mentioned a book called Wildflowers in the Median: A Restorative Journey into Healing, Justice, and Joy by Agnes Furey and Leonard Scovens. Leonard is a confessed and convicted double murderer, and Agnes is the mother and grandmother of his two victims. The book came about because Agnes decided if she didn't forgive Leonard, her life wouldn't be worth living. She did so, he responded, and they began to build a friendship. The book was a result of that relationship. (And my meeting Agnes was a result of that blog post.)

Separately yet together, Agnes and Leonard are working on an initiative called restorative justice, whereby victims and perpetrators get connected and have a dialogue. If the dialogue goes right, three things happen: the perp acknowledges and takes responsibility for his or her crime; the victim (or survivor) forgives; both find a measure of peace. Agnes is a member of Restorative Justice International, where you can learn more.

This is a huge subject, and I’m thinking I ought to write much more about it, beyond this blog. The times seem to demand it. Although Agnes, who lives in Tallahassee, Florida, is well into what people call ‘the retirement years’, she’s constantly busy. Today she told me she’s on her way to a conference on restorative justice in Louisiana. “Are you going to be a presenter?” I asked.

Our human world seems full of chaos. One does not have to give in to it.


If you'd like to receive this blog automatically as an email, look to the right, above my bio, and subscribe there. Thanks for looking in.
Posted by Elizabeth Sims at 1:01 PM