When I was a teenager my mother and I went to see "Jesus Christ Superstar" at the local movie theater. (Given how seriously she took her Catholicism and how totally immune she was to rock & roll, I was impressed at Mom's adventurousness.) We chatted over our popcorn while the theater filled up. A pair of nuns in full habit came in and took seats in the row behind us.

Apart from having to explain to Mom, during the movie, that if you didn't catch every word of "Hosanna, hey-sanna, sanna, sanna-ho", that was OK, the key moment for me was when Judas's hand reaches out for the bag of silver. In a soft, distressed tone, one of the nuns behind us called, "No, Judas!" 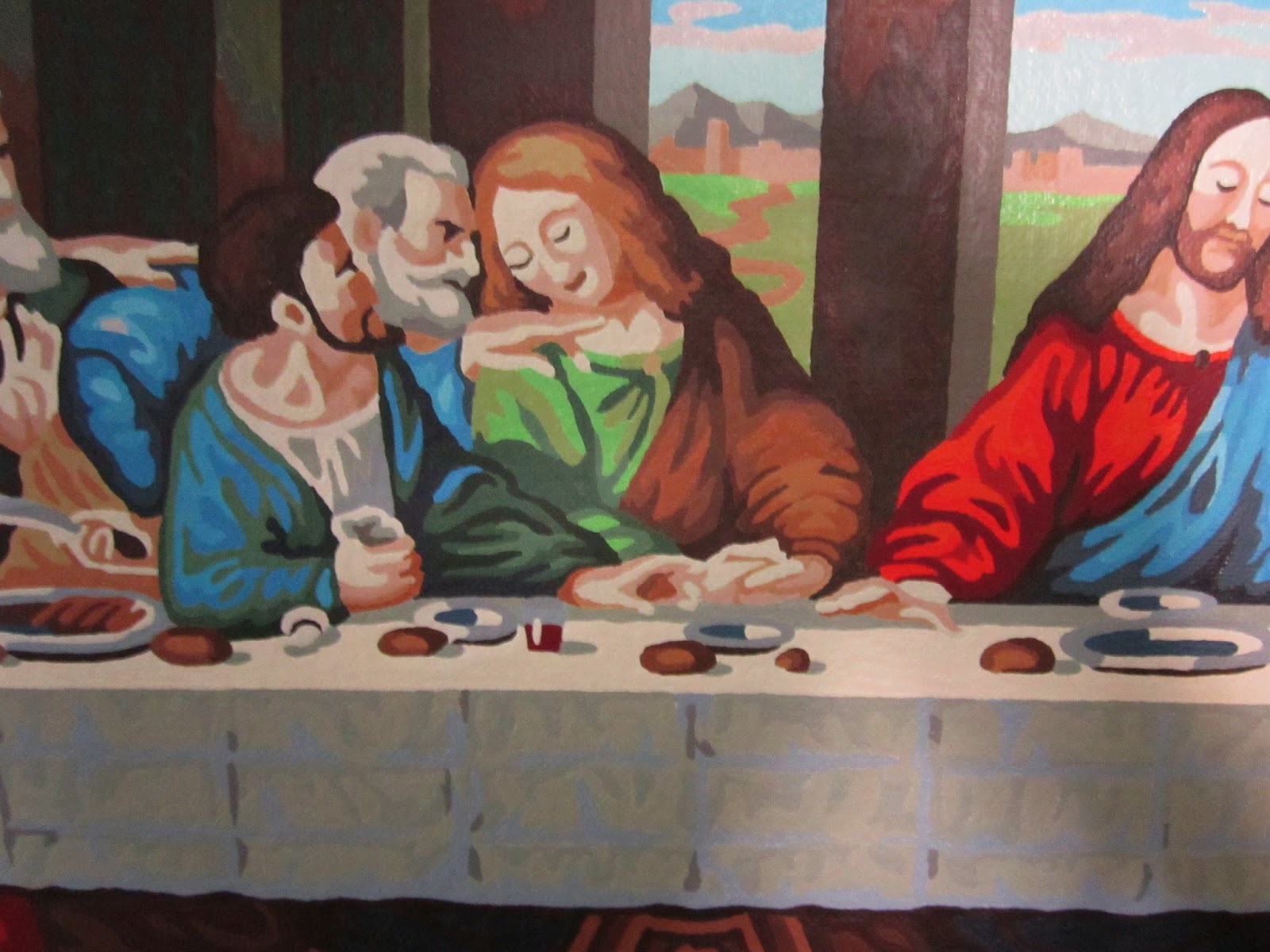 Mom and I laughed quietly. That nun urging Judas to reject the blood money has stuck in my mind all these years, because it was such a perfect manifestation of the power of story. If anybody knew how this one was gonna end, it was that nun. Yet she was so drawn in—she felt the story so deeply—that she was moved to try to intervene.

Years later I received a gag gift of a paint-by-number set of Leonardo daVinci's "The Last Supper". I took the gift seriously, however, completed the painting, and had it framed. It hangs in my office. (Didn't I do a nice job?) I note that Leonardo made clear to the local illiterate peasants which one is Judas, because he's the only one with his elbow on the table (rude sonabitch), he's holding a bag (wonder what's in it?), he's spilled the salt cellar (bad luck), and his head is lower than anyone else's (status mattered, then as now).

OK, so that's four clues in one painting. If that painting were a contemporary novel, we'd consider it heavy-handed to put all those clues in. It's our job as authors to avoid doing such, because our audience is ever more sophisticated. And it's a fun dance, calculating how much to let our readers figure out in advance.

How to gauge it?

This will help you instantly: Always assume that your every reader possesses a voracious, sharp intellect and loves your genre.

Nobody hits it perfect, and every author makes mistakes, but do what the best ones do, and never err in the direction of dumbing down or broadening your hints. Why? Because keeping it smart and narrow pleases sharp readers, and the dull ones will realize it was their fault they didn't pick up on the clues. If they love reading, they'll figure they'll have to keep a sharper lookout next time. Thus is a discerning reader born. You have a hand in it.

If, for instance, you're going to surprise us by revealing at the end that a good guy was really the bad guy all along, give us only one or two hints along the way. We don't need more.

Let's say you've got a hearty, beloved kindergarten teacher who turns out to be the one who is abducting kids to be melted down for their growth hormones on the international black market. Besides her talents at communicating lessons and soothing tears, you might let drop that years ago she worked as a Border Patrol agent but got too stressed out and had to quit. (Thus she would naturally have knowledge of at least one way to smuggle people.)

That's just a little example. Now open your heartbrain and come up with more!

What do you think? To post, click below where it says, 'No Comments,' or '2 Comments,' or whatever.
If you'd like to receive this blog automatically as an email, look to the right, above my bio, and subscribe there. Thanks for looking in.
Posted by Elizabeth Sims at 1:03 PM